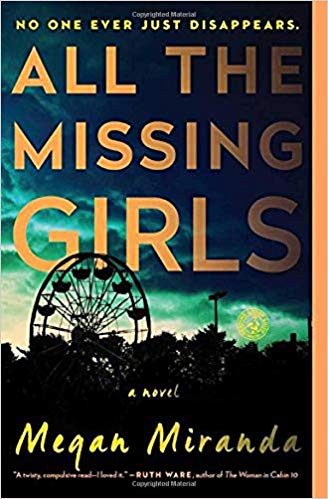 It took a long time to get to this place, let me tell you!

This book was originally a Christmas gift from Al in 2017. I first started reading it in the summer of 2018, and then abandoned it about halfway through.

However, abandoning it started to bother me several months later, so I committed to pick it back up. Finally, after about a month of effort, I finished it!

Part of the reason I abandoned it at first was due to the story structure. Told in reverse, Miranda presents quite a complex set of characters, all trying to piece together the reasons why certain events occurred ten years prior.

The main character, Nicolette, known as Nic, was hard for me to grasp at first. She appears likeable, but as you get deeper into the story, it gets muddled and messy. Almost all of the characters have darkness in their pasts. Some, in their present, too.

On the surface, it’s a mystery story. Everyone in Cooley Ridge, or mostly everyone, is trying to find out what exactly happened to Corinne Prescott ten years earlier. Is she dead? Is she still missing? What the hell happened to her?

Then, just as mysteriously, Annaleise Carter vanishes off the face of the Earth. Everyone is a suspect. And Nicolette is at the center of it all.

This was not my favorite book in the world. It was a good idea, a decent mystery. Once I finished reading it, I started to better understand why I originally abandoned it. Nicolette was a tough main character for me, and it was almost too much trying to keep up with everyone else in her world. There were too many people involved in the story, and it got muddled and confusing from the first chapter. And maybe that was part of the point? To make it confusing to add to the story.

However, I’m glad I stuck with it. Miranda did a good job building the world of Cooley Ridge, and made the past and present blend together well. At the same time, I feel like she tried to accomplish too much in one novel, her debut for adults. I felt exhausted after just 1-2 chapters in a night, and struggled to read more than that in one sitting.

If you’re a fan of suspense and solving mysteries, this is a good read to try when you’re on vacation, or wanting a different book to read. Other than that, it’s a challenge for me to recommend it higher.

One thought on “Book Review #69: “All The Missing Girls””