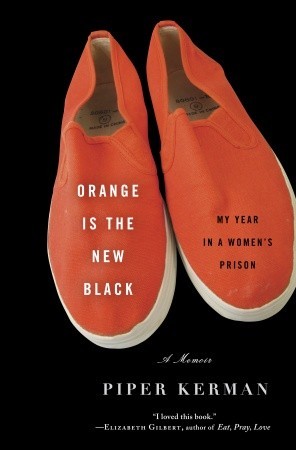 At the end of April, during a long weekend with Al and his parents, I found this paperback while visiting the Virginia Avenue Mall in Clarksville, Virginia. There were so many books – It was a really cool indoor, two-story flea market. I was hunting for something else, but for $4.00, I couldn’t pass this up!

I haven’t watched the series on Netflix, but I’ve always been curious about it. I knew it was based on a true story / inspired by true events, but I didn’t realize that Piper Kerman had written a book about it!

This was another book that I finished quickly, but forgot to write the review. I’m trying really hard to break this habit! I think it only took me about two weeks to read.

It was crazy to read about how Piper’s unfortunate globe-trotting escapades caught up with her several YEARS later. She was sentenced to 15 months in federal prison, and served her time in three different facilities.

Having only learned about prison from books and other media, reading a first-hand account from a woman who was not a typical inmate was eye-opening, and oddly fascinating. I say “not typical” because Piper was well-educated (She graduated from Smith College before getting involved with her criminal activities), and had an immense support system on the outside.

She did a fantastic job of painting the experience for the reader – I felt like I was right beside her the entire time. I really got to know Piper, as well as all the women around her. I went through many emotions – I laughed, I teared up, I wanted to scream. Mostly, I laughed. I personally think Piper tried to make the very best of her not-so-desirable situation, and I think she handled it really well.

I didn’t want to put the book down. I started to limit myself to only 1-2 chapters per night, because I wanted to read 5-6. It’s no wonder that this book has transformed into a successful series on Netflix.

Kerman did a great job with details, and made sure that the reader got as much of the full experience of her 15 months between Danbury, Connecticut; Oklahoma City; and Chicago as possible. It was also really interesting to go back in time, in a way, reading about headlines and news from 2003 through 2005.

She displayed a significant amount of courage by writing this book. She gives the reader an inside look into a tough place, and she does a really good job of showing honesty, sympathy, and advocacy.

I highly recommend this book. It’s definitely not the easiest read, but it really opened my eyes. I have a better understanding of what these women go through, and how those on the outside should be better about treating them. There’s still a huge stigma around incarceration, and these women deserve better.