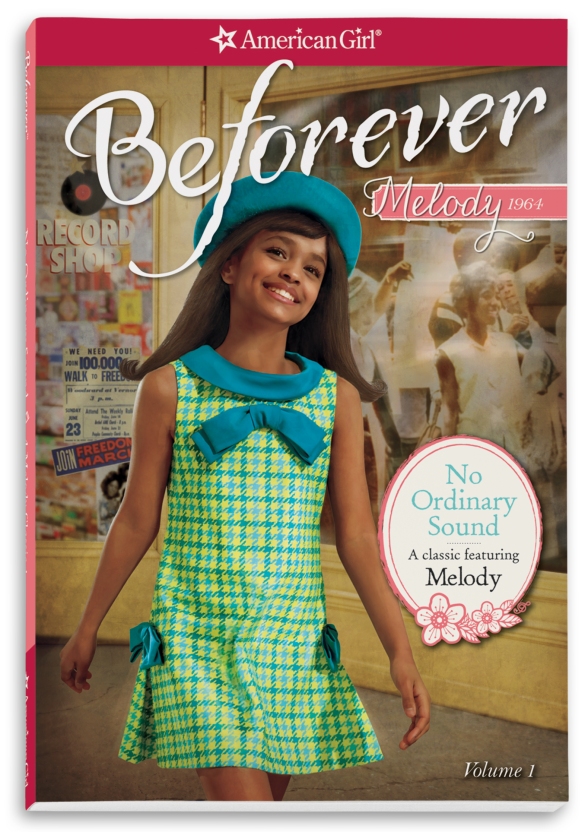 I have a long history with the American Girl brand. I was fortunate enough to have amassed quite a collection of the books before I received my first doll on Christmas Day, 1996 – My very own “American Girl of Today” that I promptly named Stephanie.

Since the early 1990s, I’ve read nearly every AG historical book that has been released. My original personal collection was eventually given away to other girls that wanted to read them, but the libraries I’ve visited have always had them in stock.

When the company announced that they were revamping their historical line of dolls into the “BeForever” collection, I was super skeptical, and actually really upset.

But then, I realized, that the company was probably doing it to expand their books, dolls, and worlds into more lives of girls and women.

At this point, I’ve accepted the change, and started to embrace it.

I’m slowly getting around to reading the revamped books. This one was the first one that I purchased, and I’m happy I did so. I plan to donate this to my local library very soon, so other girls and women have a chance to read it.

When Melody’s character was announced earlier this year, I was immediately intrigued. This was their first African-American historical doll to be released since Addy! And I don’t think it’s a coincidence that their timelines are exactly 100 years apart (1864 and 1964).

I love stories/media that come out of the 20th century, probably because of Mr. Allen’s 20th Century History class that I took in my senior year of high school. I’ve found myself drawn toward the period between The Great Depression / World War II and the end of 1970s, in particular. I can’t explain why, but I’ve greatly enjoyed learning as much as I can about that time period.

I flew through Melody’s first volume over the 4th of July weekend. I know it is written for younger girls, roughly 170 pages, but I still get great pleasure out of seeing how these authors construct their characters and their worlds. And I can tell that every detail is researched and carefully constructed, so that the historical accuracy shines through.

While reading, I felt great sympathy for Melody and her family, working together to live in 1963 Detroit amidst the struggles that African-Americans faced. I was born at the end of the ’80s, as a white female, so all I know about the Civil Rights Movement is through oral or written histories.

At the same time, I found myself drawing several comparisons to the world we live in now, in 2016. African-Americans still struggle immensely. There is widespread media coverage on many issues: Housing, jobs, poverty, #BlackLivesMatter, prejudice, protests, calls for justice. The list seems endless.

I wrote this post a few days ago, still reeling from the events of this last week. Alton Sterling and Philando Castile were shot and killed by law enforcement officers in Baton Rouge, Louisiana, and Falcon Heights, Minnesota, outside of Minneapolis. And then, last Thursday night, 12 police officers in Dallas, Texas were shot, as peaceful protests on behalf and in memory of Sterling and Castile were underway. It was the deadliest day for police since September 11, 2001.

And those are the stories the media is currently covering / focused on / obsessed with – There are plenty more stories that are not being covered.

It makes me sick.

And as I think about all of that, I realize more and more that I use reading as a true escape from the world that I / we currently live in. I surround myself with fiction and historical fiction (and non-fiction too) to get away from the reality. It may sound like a cop-out (No pun intended), but I think reading, and writing, are two things that help keep me sane in this crazy world.

I applaud the author and all the sources she used to create a historically accurate world of a little girl trying to make her way, and let her light shine, through a tumultuous time in our storied history. I hope to get my hands on volume 2 very soon.

9 thoughts on “Book Review #13: “No Ordinary Sound: A Melody Classic””