I received this book as part of a fun “book and chocolate” swap through an awesome Facebook group called The Book Drunkard. Thanks, Raquel!

I’ve been wanting to read this book even since its publication was announced. I’ve admired Laura Hillenbrand since reading Seabiscuit: An American Legend.

One thing I figured out quickly: This is a really long book! It’s nearly 500 pages. It’s not necessarily a bad thing, because Hillenbrand is incredibly detailed and well-researched. However, that’s one of the big reasons why it took me so long to finish it!

It’s jam-packed with details, beginning with Louie’s early life and Italian family in Torrance, California. I enjoyed learning about his life, his running career, and then him being thrust into the Pacific theater of World War II. He was a prisoner of war (POW) for several years, and reading about his life in Japanese camps was utterly horrifying.

Everyone should know Louie’s story, along with the other brave men he served with. I know I wouldn’t have the guts to fly the unreliable planes and dangerous missions.

This was a tough read for me. I’ve always enjoyed reading and learning about World War II, but I’ve always “done better” with fictional accounts. It’s been good for me to read more non-fiction and biographies over the years, but reading about Louie and the other men was more painful and difficult than I originally expected.

I don’t want to criticize Hillenbrand. I think this book is really good, and the research she did shines through. The list of acknowledgments at the end is profound!

But, I was not expected the length it would take for me to finish this book. I felt frustrated at times, only able to get through one chapter, and then finding 2-3 days passing before picking it up again. I was able to read more than 150 pages when we visited the farm in the middle of July, which was great, but that’s where I noticed this book takes significant concentration and emotional investment. 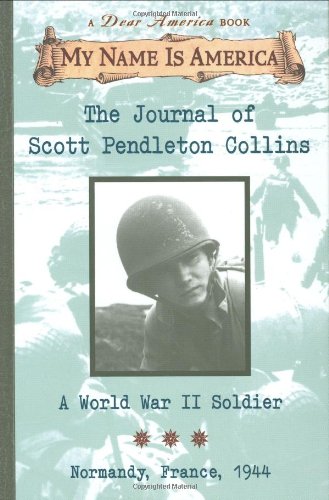 Scholastic has published three particular series that I have loved since the sixth grade.

It all started with finding Voyage on the Great Titanic: The Diary of Margaret Ann Brady, R.M.S. Titanic, 1912 in the Western Branch Middle School library. I had never heard of it, or that it was part of a series, but my best friend Melissa immediately recognized it, and recommended I read it. I did, and an obsession was born!

I have a good number of the “Dear America” books in my personal library, and my goal is to eventually own all books in all three series.

When Al and I visited 2nd & Charles in Newport News recently, I found this book on the shelf. I couldn’t pass it up for $3.45, since most of these books retail for at least $10.95, or more.

I don’t remember reading this one as a kid and young adult, but I’m glad I did now.

Summary: A seventeen-year-old soldier from central Virginia records his experiences in a journal as his regiment takes part in the D-Day invasion of Normandy and subsequent battles to liberate France.

Written by Walter Dean Myers, this is a impressive, fictionalized account of what hundreds of thousands of men went through during World War II.

It was also really interesting to realize this character was raised in Roanoke, Virginia, and talked about life in Roanoke and Winchester. It made the story even more real for me, and sobering. It also makes me want to re-read several books by Myers, who has written books about African-American life, as well as the Vietnam War, among other topics.

Reading this book inspired me to re-read the Dear America books that I already have, as well as seek out other My Name is America and The Royal Diaries books that I haven’t read yet.

Although these three series are designed for younger readers, the authors work hard to accurately portray history. Plus, I usually learn something new every time I read or re-read one.

Look for more Book Reviews on these series, coming soon!