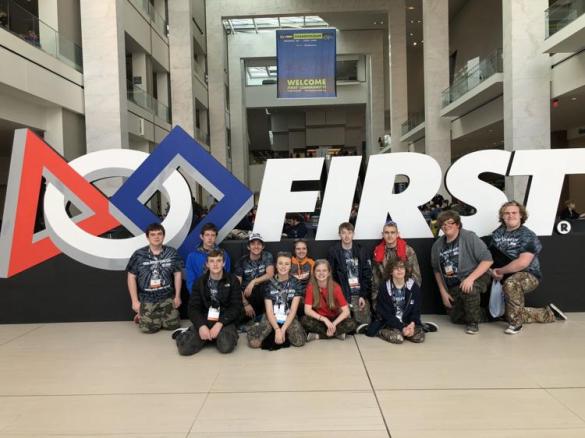 This was a fascinating editorial that one of my good friends, Mr. Lin, shared on Facebook a while ago. Mr. Lin used to be a teacher at my local elementary school, but has since created an impressive career in school administration. He has been an assistant principal and a principal in the Roanoke County Schools, Floyd County Schools, and now in Pennsylvania.

On The Roanoke Times’ website, the caption with the photo I used states: “The first team from Ridgeview High School in Dickenson County to win a state championship was its robotic team in 2018. That team went on to the world championship in Detroit, where it placed 9th out of 64 teams. Our editorial at left looks at how J.D. Vance’s ‘Hillbilly Elegy’ perpetuates negative stereotypes of Appalachia. There’s a different story the region ought to tell, and the engineering skills of students in one of the state’s most rural localities ought to be part of that new narrative.”

Every time I read something new about Appalachia, whether it’s an editorial or not, I always learn new things or discover something different. This editorial was no exception.

When I first heard about Hillbilly Elegy on NPR’s Fresh Air, I was immediately intrigued. I kept telling myself I was going to read it, but here we are, in July 2019, and I haven’t read it yet. Maybe that’s a good thing.

I didn’t realize Ron Howard is planning to make a movie about the memoir, either. I admire Howard immensely. However, I’m hesitant to see it, whenever it is released. I don’t appreciate negative stereotypes, whether they’re implied or not.

Maybe my feathers are ruffled because of my own Appalachian “history.” Much of my mom’s extended family hails from West Virginia. I have fond memories of many family reunions in Ripley and Beckley. I loved visiting my great-grandmother, Laura Bethany Powers, whom I am named after. She lived to be 102!

In addition, I started researching Appalachia on my own in high school and throughout college.

This editorial opened my eyes to the progress that has been made and seen in Southwest Virginia. Since it is the Roanoke newspaper, I understand why they focused on their own region. Still, seeing the positive statistics made me happy, and hopeful.

I still plan to read Hillbilly Elegy, eventually. I have another 15 or so books I want to read first.

But, after I read Hillbilly Elegy, I’ll likely look up the other two books that were mentioned in the editorial:

I found one other part of the editorial to be striking:

“Given all this talent, technology companies ought to be competing to locate in Appalachia, not acting as if it didn’t even exist. These are the stories we need to be telling the world — that we are a topographically-challenged and economically-challenged part of the country that is populated by smart, hard-working people.”

An interesting thought, and that needs to be explored much further.

2 thoughts on “Commentary #91: “Appalachia has a new story to tell, and it’s not an elegy” (Editorial)”