Chris Van Allsburg was practically a household name when I was younger. He has created some of the most beautifully illustrated books I have ever seen. Our future kids will definitely know about him, too.

Born in East Grand Rapids, Michigan, in June 1949. Van Allsburg has an older sister. His parents moved a few times between East Grand Rapids and Grand Rapids. After graduation, he attended the College of Architecture and Design at the University of Michigan, where the art school was located at the time. After graduating in 1972, he went on to the Rhode Island School of Design (RISD), where he obtained a master’s degree in sculpture in 1975. He opened a studio. Struggling with time in the studio, he started to sketch his ideas and designs at home. His wife thought his drawings would be good for children’s books. His first book, The Garden of Abdul Gasazi, was published in 1979.

He resides in Providence, Rhode Island, with his wife, Lisa. They have two daughters, Sophia and Anna. Van Allsburg converted to Judaism, which is Lisa’s faith.

He has received several awards, including two Caldecott Medals for U.S. picture book illustration. He was the 1986 U.S. nominee for the biennial, international Hans Christain Andersen Award, the highest international recognition for those who create children’s books. In April 2012, he was awarded an honorary Doctor of Humane Letters degree from his alma mater, the University of Michigan. 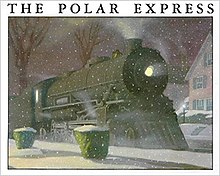 My parents have had a copy of this book since before I was born. It was a Christmas tradition for years to read the book and/or listen to the story on cassette tape. We even had a collector’s set with the book, cassette tape, and a silver bell. If you haven’t read it, you should.

Also, the movie adaptation (2004) is wonderful. We went to see it in theaters, likely the weekend it was released. We love Josh Groban in our house, so we also got the soundtrack and DVD. It’s a thing. 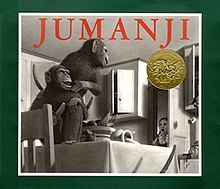 I’m pretty sure I first read this book through either the Chittum Elementary School library, or the Russell Memorial Library. I remember the Reading Rainbow episode, too.

Like The Polar Express, the movie adaptation (1995) is awesome, with Robin Williams and a cast of characters. I think I saw it on TV first. It’s one of my favorite movies that will never get old. We also saw the sequel (2017) in theaters, and it was pretty good, too. We miss you, Robin. There was also a TV series that ran from 1996 to 1999.

This is one book that I hadn’t heard of! I need to see if the local library has it. 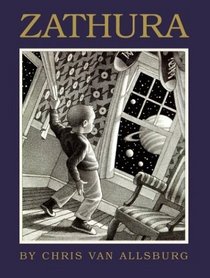 This is one instance where I saw the movie adaptation (2005) before I read the book. It’s always fun to think about and dream about space. We actually watched the movie again recently – It’s really well-done. Plus, it’s fun to see several actors when they first got their start in the film industry.

What about you? Have you read or seen any of Chris Van Allsburg’s work?