Earlier this month, a story on TODAY.com caught my eye – A mom and dad cancelled Christmas for their three sons. 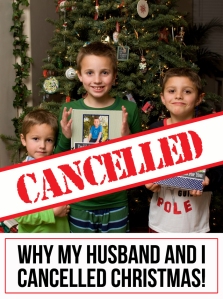 As I read the story, I realized that mom Lisa and dad John were trying to teach their three boys about the reason for the season – Giving, rather than receiving.

It was intriguing to me. The story that TODAY featured was abbreviated, so I found the full essay on Over The Big Moon.

Lisa and John had noticed their boys were caught up in entitlement and were having some related behavioral issues, so they decided to turn the month of December into a giving season. There won’t be presents, Santa, or stockings in their house next week.

Rather, they have worked on multiple service projects and using money for gifts for others, together.

I think this is awesome!

About two weeks after the original post, Lisa Henderson published an update on Over The Big Moon, the site that she runs with her friend/neighbor Dana, out of Utah – Check it out here.

She was, understandably, overwhelmed by the viral response and the Internet “trolls”, along with the reaction to the  multiple media appearances (Good Morning America, TODAY, etc). The main negative comment/opinion was that Lisa and John were doing this to punish their boys – and Lisa responded with a resounding Absolutely not.

” … Somehow the word consequence has become synonymous with punishment. I never used the word punishment. What we are doing is done out of love, not anger and we are making sure that it is a positive experience. Every choice we make has a consequence.  The definition of consequence is: an act or instance of following something as an effect, result, or outcome. Consequences by definition are neither good nor bad. I want my kids to understand that their behavior and choices matter, so we try (as much as possible) to have natural consequences rather than punishments. If our society teaches kids there are no consequences we do them a huge disservice for their future lives. My kids were expecting the world without giving much thought to others. The natural consequence is that we are giving them opportunities to give and not receive this Christmas season. We are making it fun and enjoyable …”

I can see the perception of punishment, but personally, I don’t see it that way.

Case in point – My own family.

My parents were out of town the week prior to Thanksgiving. The day before the holiday, my mom texted me, saying that she and Dad had discussed an idea – Instead of giving gifts this year, what did I think about adopting a local family of African refugees for Christmas?

Immediately, I wanted to say yes. I decided to wait to say yes in person, but there was no question in my mind when I saw that text.

A dear friend of ours, Emily, has been studying social work at a local university. We learned about this family of African refugees – A mom, dad, and three children, ages six, two-and-a-half, and a newborn – through Emily working with them this past semester.

After letting Emily know that we wanted to do this, my mom and I went shopping one cold Wednesday night. We set a budget, and wanted to get at least one piece of clothing for all five family members, a toy for each child, and then books.

Mom and I had so much fun that night, although the hardest part was finding just one toy for a 6-year-old boy that didn’t have a choking hazard. I had no idea! We definitely enjoyed it though.

Plus, we got everything we wanted, and we were under budget!

Mom put everything in gift bags and I met Emily at the university that Friday to deliver them. Emily was overwhelmed with our generosity and kept saying thank you. I was tickled pink that we decided to do this, and it was another reminder of the real reason for the season.

“I think one commenter summed it up perfectly. Her words in response to our Cancelling Christmas were, ‘Sounds to me like this will be their first true Christmas.'”

I couldn’t agree more. I feel that way, too.

With just six days left until Christmas Day, I wanted to share my thoughts. I think this is a wonderful story. As for my parents and I – I mentioned to my mom after we finished shopping that Wednesday night that I think we should make this a tradition for every year, and she agreed. I like giving back to others, and I feel like this is a great way to do it.

I’ll be posting a few more times before Christmas … But I also wanted to wish my readers a very safe, healthy, and happy holiday season!