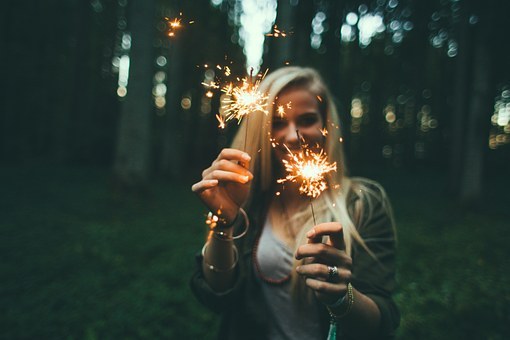 If you haven’t checked out Didi Oviatt’s AWESOME, and, frankly, kick-ass blog, do it!

Before I got to the end of Didi’s post, I knew which characters I wanted to use!

So, without further ado, please enjoy my “Celebration Party” scene!

Fireworks weren’t illegal to purchase in Maine. Every summer, like clockwork, the camp counselors were able to fill their cars and SUVs at the ready. The closest firework stand to Camp was only ten minutes away.

Not everyone approved of the idea, however. Emily, the Camp nurse, was naturally uneasy. Belinda Barnes, the Camp director, never thought it was the best idea. But, as long as everything was done safely, that’s all she cared about.

The counselors wanted the fireworks to be a complete surprise. Most summers, the Bangor fireworks spectacular could be witnessed in full from certain areas of Camp. Sadly, this year’s spectacular had been cancelled due to severe thunderstorms in the area – The first cancellation in quite a few summers. Camp’s atmosphere on Independence Day was just as stormy, with disappointed and grumpy campers. It had rained and stormed five out of the last six days, and rainy-day activities were running out of steam. So was a lot of people’s patience.

July 6th dawned sunny and beautiful, and everyone’s spirits naturally lifted. The day was full of lake activities, nature hikes, and a bit of mischief. Kristin and Brennan bent the rules a little, and stole away to their secluded picnic table spot for some hanky-panky. Counselors Andy and Melissa almost went skinny-dipping in the lake. And Ashley and Stephanie enjoyed their first true romantic moment together, which felt like fireworks to both of them.

As the sun dipped below the horizon, one of the most spectacular sunsets stretched out across the sky. Everyone was in awe, which gave Andy, Melissa, and a few other counselors enough time to set up the surprise.

The crickets started chirping, and everyone tuned in to the bullfrogs along the lake. They knew a surprise was being revealed, and everyone waited with bated breath.

Andy and Melissa shared another kiss right before the fireworks show was about to begin. All safety measures were reviewed and checked. The spot along the lake shore was perfect, and they couldn’t wait to see the camper’s faces light up.

Andy, the oldest counselor, was in charge. The first three fireworks were disappointing duds. But, Emily, of all people, kept the crowd hyped. The fourth firework finally shot off with a brilliant burst, and hearing the crowd’s cheers and whistles made it all worth it.

Melissa, right by Andy’s side, winked. “Let’s give them the best show ever.”

Andy nodded. The next 30 minutes felt like Camp had their own fireworks spectacular. Fireworks of every shape, size, and color were shot off in rapid succession. The noise across the lake only increased, and the counselors felt incredible. It was a great celebration all its own.

Minutes after the grand finale, through the hazy smoke the counselors could still hear the cheers and whistles. Kristin and Brennan were dancing in ankle-deep water of the lake, and so were Andy and Melissa. Ashley and Stephanie shared a kiss, not caring who saw. Everyone was celebrating in their own way, and it felt great. The atmosphere of Camp that night turned completely around. All thanks to roughly $1,000 of fireworks.

So, there you have it!