Yesterday, Al and I drove up to Richmond to reunite with our friends Drew, Katie, Justin, and Heaven. The six of us hadn’t gotten together since January!

The main reason for the get-together was this: 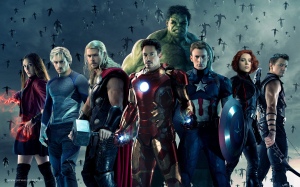 All of us were excited to see Avengers: Age of Ultron. Drew, Justin, and I had bought the tickets online late last week.

I won’t spoil anything, but I will say this: If you like the Avengers, go see this movie in the theater. It’s totally worth the money!

The movie was at 5:15, so Al and I drove up in the morning. We hung out with Drew and Justin before Katie and Heaven arrived. We’re all big fans of John Oliver and his show Last Week Tonight, so the four of us watched his episode on Government Surveillance. I hadn’t watched it, and it was very compelling.

Watching that prompted Al to suggest the documentary Terms and Conditions May Apply. Al and I watched it together on Netflix a while ago, but neither Drew nor Justin had seen it, so we watched it. It’s startling.

We decided to head to the movie theater after that, and it was perfect timing. Katie was pulling into the driveway as we were walking to my car, so we all piled in my car and headed to the theater. We drove through downtown with the windows down – What a beautiful day! It was so nice to see the bright sunshine after two straight days of rain!

We got our tickets and hung out for a while, getting our popcorn, ICEEs, and sodas before settling in. Heaven met us there. Some of the previews were awesome, including Ant-Man and Jurassic World. There are a bunch of awesome movies slated for release this summer!!

After the movie, we all headed to Cheeburger Cheeburger, which is becoming a tradition with our group. We enjoyed burgers, fries, their crispy onion rings, and shakes. Delicious!

Once we were full, we headed back to Drew’s. Al and I had to drive back last night (I have my final exams this week!), but before we left, I had brought some gifts for everyone:

It was so much fun!

We also celebrated Heaven and Justin’s graduation from Longwood. Commencement is next weekend, so Drew and Katie gave them cards and gift cards to Game Stop and Domino’s.

Al and I had to leave after that, but we had an awesome time!

Can’t wait until we get together again!