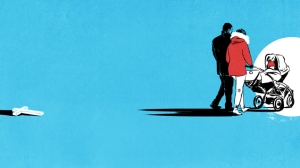 “Organized religion is a sham and a crutch for weak-minded people who need strength in numbers. It tells people to go out and stick their noses in other people’s business. I live by the golden rule: Treat others as you’d want them to treat you. The religious right wants to tell people how to live.” – Jesse Ventura

I don’t agree with this entire quote, but “It tells people to go out and stick their noses in other people’s business” speaks volumes.

Recently, I published a post commenting on the article titled “Godless Parents Are Doing A Better Job.”

Didn’t get a chance to read it yet? Check it out.

When I published the post, the first response I got was from my friend Justin. He messaged me on Facebook, saying: “It wasn’t bad. The only thing I think you might have included is the fact that you may be expecting questions from people in your church (or other people) on how to raise them, and how you will know that your blood runs in their veins and that alone gives you the right to raise them as you see fit, religion or no religion …”

I was very pleasantly surprised to look at my WordPress stats page later on and see 25 views – Wow!

Then I went back to Facebook, and noticed two things about the “likes” on my post with the link:

This was interesting to me.

I’m not trying to make assumptions here, but I feel like people either

Religion is one of those touchy topics. It’s very polarized. It tends to light fires under people.

For me, I don’t want to start fires or make anyone my enemy here.

I just want to have a civilized discussion on this subject, with anyone who is willing to listen and participate.

And that previous sentence right there is where some of the issue is. A lot of people don’t listen well. I’m getting better at it, every day. It’s hard to listen when you have an opinion, an agenda, or something to say – Trust me! I’ve gotten so wrapped up in talking, and thinking about what to say next, that I realize, after the conversation has long ended, that I was barely listening.

Over the last few weeks, since I published the original post, I started reflecting on several things:

When I first wrote the original post, it was tough for me to get my thoughts sorted out and somewhat straight. That’s why it took so long for me to write that post!

In my reflections, with time, I found myself less confused. I started seeing things a little more clearly.

I believe that “everything happens for a reason.” I’m living proof of that, literally. I was not supposed to survive my entry into this world, but I did. I should have had many more medical and developmental challenges, but thanks to my parents and doctors and a host of others, I didn’t.

This belief has continued throughout my time on this Earth. I believe that I was with John for so long to teach me how love can be flawed. I know that staying with John for so long, although awful and terrible and terrifying for half of it, helped me connect with Nick, and that led me to Al 🙂

My current view of the church, as a whole, is a bit skewed. My current church has been going through transition, for some time now, with membership in steady decline and the recent announcement that our senior pastor slated to leave this summer and a new one to come in. Also, this is the church that I have been attending almost every Sunday since I was four years old.

But as a 26-year-old, who is to be married in about seven months and planning to have a family one day, I’m not happy with the church. I feel smothered almost. It’s getting harder to smile on Sundays. If it weren’t for me being on the multi-media team and helping my parents out with Sunday School and blood drives on a regular basis, I wouldn’t see myself attending.

I go for the social aspect, to see the friendly faces. I’m becoming more withdrawn from the church services; less interested in worship, the Bible readings, and the sermons. I’ve learned more from helping out in the children’s Sunday School classes, which to me is exciting and sad simultaneously. I feel more connected with our associate pastor at the moment, and one of the main reasons is because she is closer to my age.

Observing the families in my church, they are wonderful people. The kids are well-behaved, for the most part (The parents are a significant part of that overall issue, but that’s another blog post entirely). The Sunday School program that we have for grades 1-5 is awesome, but attendance is down drastically, due to our steadily declining membership.

For me, if I brought a child into this world tomorrow, I would hesitate to bring them to my church.

Do I want my child/children to be baptized as infants?

Do I want my child/children to learn who God and Jesus are?

Do I want my child/children to be raised in the same church that I was?

Do I want my child/children to attend church regularly?

With the church, I want to guide my child/children, trying to strike a balance between holding their hand in life and letting them go on their own to discover and explore. I want them to know how I was raised and what I learned – BUT – I don’t want to raise them exactly like I was raised. I want to do that on my own terms. I am not dictated by anyone. As the mother, I have the right to raise my child/children as I see fit.

I do not plan to raise them in the church that I was raised. That was my original plan, for many years. But I have lost faith in my church over several years, literally. I don’t feel inspired like I used to be. If I don’t feel that way, I don’t want to show that to my child/children.

Looking at my friends that I closely associate with, many of them don’t regularly attend church. I can only think of three or four that go to a church. And those three or four don’t have children, not yet, anyway.

Those that have children, and there aren’t many, I haven’t seen them at my church or involved in religious activities with their children.

To me, this is part of my generation. We were raised in the church, but our marriages and families are less involved in church and religion. And to me, that’s not necessarily a bad thing.

I have several friends that do not identify with religion, or with God and Jesus. And to me, that has been so refreshing. Remember how I said earlier that I felt smothered in my church?

Meeting people and becoming friends with those that are not Christians or who are less involved with the church and religion as I have been – It’s been a breath of fresh air. It’s been eye-opening. I have had more deep discussions about religion and other societal topics with them than I have with many of my Christian friends and acquaintances.

Like Jesse Ventura, I strive to live by the Golden Rule as well. I don’t want to tell people how they should live or how they should raise their children, so neither should they.

As I think about the next year, I’m very excited to be married to the love of my life in my church sanctuary. To me, my marriage ceremony in that sanctuary is symbolically closing a chapter of my life that has been Aldersgate.

I don’t plan to withdraw from Aldersgate entirely come November 15th, but I do plan to focus on my new marriage and new home for a while. If that means I don’t attend church as much or be as involved in favor of spending more time with my new husband and our commitments to each other, then that’s the way it will be. Aldersgate will always be a part of my life, no doubt about it. But my involvement will change.

As far as raising my child or children in the church, I don’t plan to be a completely “godless parent.” I plan to draw on my life experiences to give them as wonderful of a life that a mother can give.