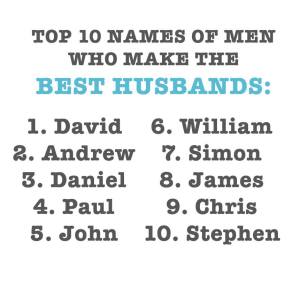 I posted it just for fun, but I got some interesting feedback as well.

For me, I wanted to cross #5 off the list automatically, because of my past. Ain’t nobody got time for that!

Although, I thought it was interesting to see mostly Biblical names on this list (this is the researcher in me coming out):

Anyway … Here’s my list! Notice that it’s not numbered. “Top” lists are for ranking things, usually from best to worst, or based on number of votes.

Here, rank doesn’t apply. These are the names of men who I know will be (or already are) awesome husbands.

Frankly, your name and/or what it means doesn’t matter.

As long as you’re a good person and you treat your spouse lovingly and with as much support as you can, that’s what counts.

Anyone can be the best husband (or best wife, best boy/girlfriend, best partner).

It’s your choice, and yours alone.

3 thoughts on “Getting Personal #8: “Top 10 Names Of Men Who Make The Best Husbands””