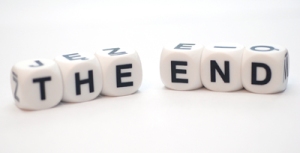 “Writing, to me, is simply thinking through my fingers.” ~Isaac Asimov

So after a couple of weeks’ hiatus, I’m back.

To bring you the end.

The start was quick. Brennan’s shirt came off first. Kristin shone her flashlight on his chest, taking in his muscles, his skin. Then she took the light away, letting her eyes adjust. She realized that taking the light away only bumped up the allure and the sexiness. She took a deep breath.

“Here we go, the start of something new,” she thought as Brennan’s fingers slipped under the hem of her tank top.

Brennan could barely contain his excitement, his joy. His fingers practically danced their way to the hem of Kristin’s top. He hesitated ever so slightly, hoping Kristin wouldn’t notice.

“Let’s hope I don’t screw this up,” Brennan prayed as his fingertips got their first real taste of Kristin’s skin.

Kristin drew in a sharp breath as Brennan’s fingers and hands settled on her torso, but she kept kissing him with such ferocity, she didn’t know who she was. Not that she cared, or anything. She was on summer vacation, hooking up with this amazing new guy and they were in uncharted territory. And she loved every single second of it.

His fingers quickly found her bra straps. He fingered them for a minute, twisting them around. Then he slowly slid them off her shoulders and down to her biceps, where he was taken aback by how much muscle was there, for a 110-pound girl, anyway. He heard an audible sigh-moan then, accompanied by a full-body shudder. Brennan smiled. He knew he was playing his cards right, and headed full steam for the jackpot.

Kristin helped him unhook her bra and carefully extricate it from her tank top. As he set it between them, he got a look at her nipples. The tank top was slightly translucent for one, but he knew she was turned on because they were pea-size already, but to Brennan, they looked like marbles. Brennan’s hand headed back inside via her armpit, but Kristin beat him to the punch by just taking it off. Brennan felt a charge of energy and hormones.

“Dude, she’s a keeper if she practically tears it off in front of me.” His eyes were probably as big as saucers, but he tried not to stare.

Kristin looked down briefly, placed her own hands on her breasts and gave her nipples a little twist. She sighed contentedly and looked at Brennan. She giggled at his shock. “What, a girl’s never ripped off her top for you?” Brennan could only move his head back and forth, stars in his eyes and a complete over-wash of awe, love, respect, and desire for this gorgeous girl.

She knew he was still in shock, so she took his hands from frozen in mid-air to an instant fire up by placing them on either breast. Brennan snapped back to reality instantly, looked at his hands, and kissed Kristin with tongue so hard that they both moaned simultaneously. Kristin let him fondle, twist, stroke and bounce her breasts and nipples to his heart’s content. Her nipples did indeed turn into small marbles.

Keeping time, it was only a few minutes. But Brennan knew time had stopped. It only started again when Kristin intervened again, this time moving his hands down, as in to her tiny shorts.

Brennan couldn’t be more elated. She guided him through the snap and the zipper. He looked down and removed her flip-flops before he helped her to shimmy out of her shorts. As his eyes moved back up to her underwear, he carefully stroked her legs from toes to hip. It was then that his fingers hit her hip. She didn’t have on any underwear at all.

Brennan again registered immediate shock and awe. His jaw literally hit the dock and stayed there. All Kristin did was giggle and smile from ear to ear.

“Good God. This girl is awesome. Now I have to impress her.” Brennan picked his jaw up off the dock, ran his hand through her beautiful hair and kissed her, hard.

As if Kristin could read his thoughts, she whispered during a kiss, “Don’t worry. You don’t have to impress me. I was worried about impressing you.”

Brennan’s mind filled with exclamation points and a few question marks. “Did she really just say that to me? I’m even more turned on now …”

Again, like she was reading him, her hand landed squarely on his crotch, though gently. She started stroking him like a cat, and he started purring on contact. All Brennan could do was to stare at her naked body, the beautiful meter completely off the charts. He did have the sense to slip his T-shirt underneath that gorgeous, hot, sexy ass of hers at one point. So help him, she wasn’t going to get any splinters anywhere on her gorgeous tan body, but especially not there, not on his watch.

As he slipped the T-shirt under her butt, he was made keenly aware that Kristin was headed for the snap and zipper. His penis was completely out of control by now. He helped her tiny fingers, and then before he knew it, she was stroking the cotton fabric, just as quickly headed down under.

She laid a hand on his bare thigh and he about lost it, right then and there. He grunted to get a hold of himself, silently told his penis to pipe down, that they hadn’t gotten to the sex part. Kristin giggled and moved a little slower after that.

She fingered his waistband. He was taking several deep breaths. He psyched himself up, but then remembered her reassuring words a few minutes earlier: “You don’t have to impress me.”

Then, just as soon as he registered her fingers under his waistband, his boxers were gone. She was staring just as much as he had been over her. She took him in, literally from head to toe. But her focus always snapped back to his penis within seconds. She couldn’t get over it. Brennan smiled in complete relief and satisfaction.

Kristin was in awe. “Whoa. Whoa, his penis is so huge. That’s awesome! I don’t know why I was worried. I mean, his is slim for our age … but he certainly makes up for it here. But, if he’s so big and I’m so small, how can we fit together?”

Brennan basically read her thoughts this time. He kissed her, looked into her deep blue eyes and said, “If you’re worried about, you know, me fitting? I think we’ll be fine. We’ve been a perfect match so far, so why should this be any different?”

Kristin sighed in relief. He understood, and he wasn’t worried. So she decided that she wouldn’t be freaked either. Besides, there were plenty of other mismatched couples, in terms of size, that had bragged about how awesome their sex had been. There was one football-basketball player that was six-three and 250-plus pounds who’d been with one of the 95-pound, five-two flyers on the cheerleading team for years. According to the school rumor mill, they apparently had the hottest sex in the whole school, and in their share of the riskiest of places: On the half-court line in the gym at all hours, buried among the cheerleading mats during practice, under the football stadium bleachers after almost every home game.

She was snapped back to reality by Brennan kissing every part of her, head to toe. He started with her hairline and moved down at an excruciatingly slow pace, but Kristin loved it. He kissed her forehead, eyelashes, shoulders, nipples, belly button, pubic bone, knees, and every single toe on both feet. She sighed with every deep kiss. She giggled at the flicks of his tongue. He even went so far as to suck her nipples hard and gently sucked every one of her toes.

As Brennan’s head came up from her feet, she ceased her maniacal giggles from her ticklish toes and sighed. “You know, there is one place you missed; one other place to suck, that is.”

Kristin guided his fingers, and eyes, down to her sweet spot. She scooted backward a few inches, making sure she wouldn’t topple head-first into the lake below in the process. His fingers traced circles along her inner thighs, starting at her knees. She stifled giggles and shudders as his fingers got closer and closer to her vagina. She stopped him just short of her opening, though, and started to gently touch and press her clitoris with her index finger. Her moans started coming uncontrollably and Brennan could see her physically shaking with emotion and excitement. Brennan watched in awe as she expertly pleasured herself. Kristin was putting on a show for him, and she didn’t even know it.

“And now I’m practicing everything I learned in front of the guy of my dreams,” Kristin thought as she touched herself with rising confidence and passion.

I am so excited to finish this, to get to the true ending.

I hope to write so many more pages.

Thank you for reading this.

Starting next week, Writing Wednesdays will transition to my 2013 novel. I hope you’ll come back then.