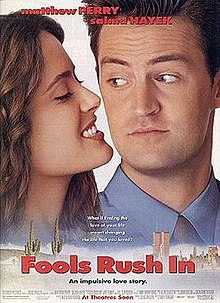 About a year ago, Al and I were looking for something to watch on streaming during a weekend. He asked if I’d ever seen Fools Rush In. The blank look I gave him said it all, and he couldn’t believe it.

This movie is now in my top 20 favorite movies. It’s very much of the time period – Matthew Perry was in the limelight because of Friends, and Salma Hayek’s star was rising, having been a telenovela star and then in a few feature films at this point.

Although insta-love doesn’t always work, this movie is an exception. Their characters are instantly attracted to each other. And, in a city like Las Vegas, nothing is surprising.

One of the best things about this movie is the soundtrack. So many good songs! I mean, Elvis! Also, Dean Martin, Wayne Newton, Enrique Iglesias, and Gloria Estefan!

The story itself is very sweet, and I enjoyed their chemistry. I want to watch it again!