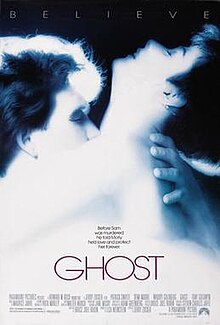 I still remember my mom’s shock when I told her I hadn’t see Ghost. This was when I was in high school. We either rented it, or got it from the library, and watched it together. It quickly became one of my favorite movies!

It’s a great story, set in New York City. I’m on a roll! Not to mention Demi Moore is adorable with her “boy cut.” I pined for their loft apartment! And Patrick Swayze, once again, lights up the screen in more ways than one. They are a great couple. Despite the early tragedy / drama, it’s truly a good movie, with chills, thrills, romance, and plenty of laughs. Whoopi Goldberg absolutely earned her Best Supporting Actress Oscar!

Mom and I went to see it at the local movie theater for either the 20th or 25th Anniversary. It was my first time seeing it on the big screen, and it was such a cool experience. It kind of brought everything full circle, in a way. For Mom, it brought back so many memories of her going to see it in theaters in 1990, when we lived in Governors Island in the middle of New York Harbor.

And, yes, we totally sang along to “Unchained Melody.”