We had a spectacular weekend in Richmond!

A decision was made to come up with a solid plan and make it happen.

We wanted to get together in October, and this get-together started with a conversation about the concept of Escape Rooms.

We knew we wanted to go to Mama J’s for one meal, and then Bottoms Up came into the conversation.

That weekend, Laser Quest was offering a Triple Play event, where we could play three games, back-to-back, for $20 per person.

And then the Key Quest Escape Room was only $15 per person. Not too shabby!

I was able to make the Laser Quest and Key Quest Escape Room reservations on the same day, and in the same phone call! Score!!

Al and I arrived at Drew’s around 9:30 on Saturday morning, October 10th. Drew, Justin, and Heaven greeted us. Katie arrived shortly thereafter. We split up into my car and Drew’s mom car, and we were off to Mama J’s. 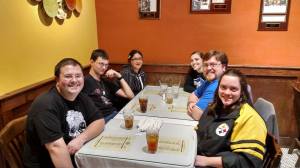 We had a Halloween theme for Saturday. Drew wore his shirt with all of the classic horror movie characters. Justin wore a shirt that had the character Gasai Yuno on it from the anime “Mirai Nikki (Future Diary in English).” Heaven won the day: She had on her reversible Nightmare Before Christmas hoodie, plus some awesome barrettes and bows in her hair. I wore my Longwood Oktoberfest 2010 shirt. Katie wore her Steelers jacket, but underneath she had the Baltimore Ravens shirt that Justin bought for her for our Kings Dominion adventure.

At Mama J’s, we stuffed ourselves silly with amazing soul food: Fried chicken, pork chops that were smothered and covered, macaroni and cheese, potato salad, and some of the most amazing cake!

After lunch, we headed over to Laser Quest. We were early, so we hung out and waited for our first start time. Shortly after we arrived, one of the employees saw us sitting and asked if we were the party of six 🙂

For Triple Play, we had signed up for three games, back-to-back. It was awesome!

The first game was the best – It had the least amount of people. You can have up to 32 people play a round. The first game had maybe 10 people total!

The second game was a little bigger. The third game almost filled the arena – There were birthday parties cycling in and out all afternoon.

Having bets or agreements between members of this group is becoming tradition. With football season in full swing, there was a NFL bet on the line. Justin, Katie, and I had our team shirts and our rival shirts packed. It was a battle for first place.

I ended up wearing my Denver shirt on Sunday. Justin bested me by almost 1,000 points! It was still fun though. Running around, shooting your friends with lasers? Awesome!

We then headed to downtown Richmond for dinner at Bottoms Up. We parked across from the canal. Walking in, we saw the silver line – The silver line of paint marking six feet, two inches. This was the height of the floodwaters that Hurricane Gaston blew into the restaurant! Fortunately, they rebuilt and reopened to serve some of the best pizza!

Everyone got something a little different, but all equally delicious. My “slice” was technically a quarter of a whole pizza! I tried to eat it all, but couldn’t. The leftovers were just as good on Sunday night though!

We had some time to kill before going back to LQ for the Escape Room experience. It was chilly, but the canal was right there, so we explored a little bit! 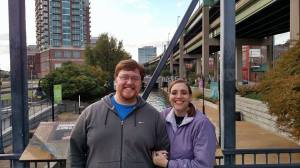 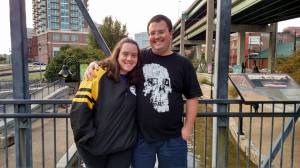 It was interesting to see the history markers and walk a different part of Richmond. We discovered that there are boat tours, so that was added to the list for next time!

We got back in the cars and headed back to Laser Quest for the big event of the weekend: Key Quest Escape Room.

We knew the basics – The six of us would be locked in a room together for up to an hour, and we had to solve a series of clues and puzzles to escape. If we solved everything before time was up, we would be winners!

The theme for us was “The Basement.”

It was disorienting at first – We were blindfolded and led into the room in a line, holding on to each other’s shoulders. Then, we had to listen to a recording for our first instructions and clues. After that, we took off our blindfolds and realized that the room was very dimly lit, making it difficult to see things and solve the clues and puzzles.

Those 45 minutes we had – It flew by! There was a timer running, and when it beeped, we knew were done.

We had a walkie-talkie where we could call a team member for one clue.

It was a tough challenge – Tougher than most of us thought.

Unfortunately, we weren’t able to “escape” before time was up. But, it was a good experience overall. We were dissecting it in the cars on the way home, later that night, the next day, and even a couple of days afterward!

When we got back to Drew’s, we put on Dracula Untold. I hadn’t seen it. Unfortunately, I missed most of it too – I kept falling asleep. We were planning to play some games, but after the movie ended, we decided to call it a night and play the games in the morning.

On Sunday morning, five of the six of us were up early. Drew’s mom made us an amazing breakfast – Cinnamon rolls, biscuits, sausage, bacon. Yum!!

After Drew got up and ate, we settled in for a lively game of Munchkin. We easily killed several hours. It was full of monsters, fights, a little bit of backstabbing, and twists and turns. Heaven was the winner!

Once we cleaned up Munchkin, Drew and Katie were talking (actually, raving) about The Cookie Monster Cafe, a local place about 15 minutes from Drew’s house. We headed there for lunch. It was an excellent decision. I had the best grilled cheese sandwich and house-made onion rings! And they had Nantucket Nectars, an amazing line of juices! We thoroughly enjoyed the food and the hometown feel.

After lunch, we said our goodbyes as Al and I headed home. Justin and Heaven headed back to Drew’s.  The original plan was for them to watch the Broncos (Justin’s team) play the Raiders, but since we’re in Virginia, the Patriots game was aired instead (Boooooooo!)

So, instead of football, they watched Criminal Minds, a show that many of us have watched over the years. It’s hard to believe that it’s been on the air for 10 years now! I also heard that Cards Against Humanity was played, at some point, after Heaven headed home.

Katie also texted me a photo of Justin – He was wearing his Steelers shirt, Packers shorts, Broncos necklace, and drinking from his Ravens tumbler with the purple crazy straw.

It was a fantastic weekend. My question: Where has 2015 gone?

We look forward to more adventures – Our wedding in a few weeks, then getting together for Star Wars VII: The Force Awakens, and then ringing in 2016 with a new Secret Santa gift exchange!