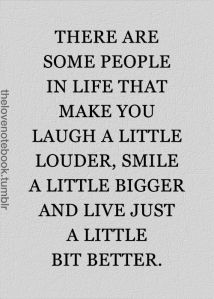 This quote is Katie to a T!

Katie came and slept over this weekend!

We’ve been friends since that fateful The Rotunda student newspaper meeting in 2007. We are going to be bridesmaids in each other’s weddings – Mine in about four months, and Katie’s is being planned for sometime in 2016. It’s very exciting.

I hadn’t had a close friend sleep over at my house in several months, so it was awesome this worked out. 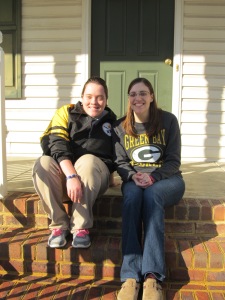 Last night, my parents, Al, Katie, and I went a friend’s house for the spring/summer social of PEO. Mom and I are sisters. PEO stands for Philanthropic Educational Organization. It is a wonderful group of women in the U.S. and Canada, who raise money for educational scholarships and loans for women in the U.S. and internationally. PEO also has its own college, Cottey College, in Nevada, Missouri.

I could sit here for days and tell you about PEO. My mom became a sister in 1992. Before that, my dad’s grandmother, mother, and his two sisters have been PEOs as well.

Katie learned about PEO through a woman from Illinois, who came to Norfolk last month to speak at a leadership conference. This woman said that Katie should talk to other PEOs, and at the time, Katie said that she didn’t know anyone who was a sister.

Come to find out, earlier this week, I extended an invitation to her, and her response on Facebook was, “Wait, isn’t PEO philanthropic educational organization?”

I about fell off of Al’s couch when she wrote that!

The social was very nice – A great group of women and their spouses/significant others, also known as B.I.L.s. There was so much food! Katie talked to several of the ladies who were very eager to meet her and get to know her better. Having PEO socials is like a reunion of sorts – There are six local chapters within the cities of Suffolk, Chesapeake, Portsmouth, Norfolk, and Virginia Beach – so it’s awesome to see who shows up!

After food and drink, Sara gave a presentation about her last year as a Cottey student. Sara is from Virginia Beach and discovered Cottey after visiting for a weekend. It’s a great school. It only has 250 women, but a bunch of states and over 15 countries are represented. A lot of money that PEOs raise goes directly to Cottey. Clearly, going to Cottey changed Sara’s life – She just earned her two-year degree, went to Thailand for two weeks before graduation, and is now considering Longwood (!!) or Christopher Newport University for further education. Katie and I are hoping to take a trip out to Cottey at some point – It sounds like so much fun!

After the social wound down, I drove Al back to his house. He gave Katie the two pieces of artwork we bought from Tidewater Comicon for her fiance, Drew. We’re so excited!

We got home and chatted with my parents for a while before Katie and I hung out. She was thrilled that I had my American Girl dolls on display, and we launched into planning a future trip to D.C. with our close group of friends!

We both started getting sleepy and decided to turn in for the night around 11:00 p.m.

I woke up this morning around 6:00 and turned on the TV. Katie joined me around 6:30, and then my parents were shocked that we were up so early. The four of us chatted and shared stories before Mom started to get ready for church. Katie and I ate breakfast, talking about her upcoming trips to Pittsburgh and then Ohio!

She Face-Timed with Drew for a few minutes as well, so that was fun to talk to him for a bit.

This morning was nice and relaxed. Katie then got cleaned up and headed toward Richmond to see Drew and Drew’s dad a little while ago.

The sleepover was so much fun – Hoping to do it again really soon!