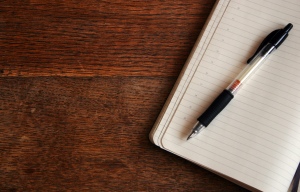 “In a mood of faith and hope my work goes on. A ream of fresh paper lies on my desk waiting for the next book. I am a writer and I take up my pen to write.” ~Pearl S. Buck

That quote jumped out at me on the computer screen. I may not be writing by hand, with a pen, but I use my fingers to type!

I’m so excited about this! I’m starting a new series!

I really loved doing my NaNoWriMo posts every week a few months ago. I loved posting excerpts of my writing on a consistent basis. It was a great challenge and motivator for me.

Best of all, I knew there were people waiting to read them.

As I ended that month of posts, I thought about my two other attempts at NaNoWriMo, in the years 2012 and 2013.

Well, with some encouragement and many kind words, I’ve decided to share excerpts from those novels as well.

I want to do this for several reasons:

So, introducing … the first installment of Writing Wednesdays!

I’ll be publishing a new excerpt every week. I’m starting with the 2012 novel. Once that one ends, I’ll start the 2013 novel.

I definitely plan to add more to these two stories; just not quite yet. I want to give you what I have written, so far, and then we’ll go from there. One bite of the elephant at a time, as my boss at work likes to say.

I hope you enjoy! As always, I welcome any comments, and feedback is certainly appreciated!

Y’all are the best readers, I hope you know that 🙂

Kristin woke with a start. She knew she was blindfolded and she figured it was dark, wherever she was.“I guess I’m inside a closet or something. The prank war finally fell to me,” she thought, rolling her eyes.

Then she felt a slight breeze on her skin, making her shiver uncontrollably for a few seconds. “Okay, so I’m outside under some trees. No biggie. No prank is bigger than I am. Wait ’til everyone hears about this in the morning … or maybe it is morning already. Yeesh. It’s not cool to drag someone out of bed at 2 a.m. Wait … how did I get here again?”

She let the thoughts roll for a minute, which quickly turned to panic. “Crap. I’ve been taken. Just like that chick in the movie that came out a few years ago, when her dad got super pissed and went to France to find her. I’ve gotta get out of here.” Then, she heard the sound of heavy breathing in her left ear, like someone was lying down beside her.

She felt a hand move along her shoulder and then darted away, like that boy in seventh grade who wanted so badly to hold her hand, even if it were for five seconds. Although her panic level was rising, the heavy breathing in her ear was strangely comforting. And whose hand was that? Kristin thought she’d reached for her shoulder to quell the goose-bumps she had from the chill.

Then she realized, in utter horror, that her own hands were tied to something above her head.

Okay, let’s back up for a bit. Kristin, who you just met there, is a 16-year-old girl who comes from the Midwest. She is a simple girl who was raised on a dairy farm. She is considered a typical girl in her high school, one of who blends into the crowd. She’s been kissed several times, but never had a serious relationship. Well, there was Trevor … but we’ll get to that part later.

She left her sophomore year for the summer yearning for something different, something adventurous. There was one girl, a freshman, and a guy, who graduated this year, who participated in this thing called Camp. Kristin had heard the rumors and the little bit of trash talk associated with their “adventures” and “gallivanting,” but at the beginning of that summer, she yearned to find out what Camp was all about for herself.

Kristin discovers that she is one of the “newbies” at Camp. She isn’t alone. There are a different number of people who come to Camp. Ages range from 13 up to late-20s. They are from all different walks of life, from all over the country. No two people come from the same place in a single session. And it isn’t just in the summer. Camp isn’t open year-round, but there are “sessions” two or three times per season. However, the one similarity is that every single person who comes to Camp leaves utterly changed, but it is unspeakable. Not in the forbidden way, but those who have had Camp experiences simply can’t describe them to the inexperienced.

“Kind of like those ghost hunters or people who have near-death experiences,” Kristin mulled, but with a bit of uncertainty.

The day came to leave for Camp. Kristin’s instructions in the weeks prior came through a series of texts on her phone. Her parents probably wouldn’t be happy about her phone bill, but she didn’t really care and that point. She was getting out of her little town for almost a month and she couldn’t have been more excited.

She had her zebra-print bags packed. Her dad drove her to the airport in their beat-up pickup truck. Kristin’s exhilaration surged halfway there, knowing that no one in the town would be with her during these experiences, whatever they may be. She had no reservations, strangely. She’d been on an airplane a couple times before, so the mode of transportation certainly wasn’t an issue. She’d been to camps throughout her childhood: Girl Scouts, symphonic band, watercolor painting, soccer and a whole menagerie. The only major differences: this Camp was all the way in rural Maine, the focus was not specified at all. Plus, Camp was capitalized.

“That’s significant in some way,” Kristin thought as the truck bounced along the highway. Suddenly, the control tower of the airport came into view and she was lost in thought & daydreams. Only her imagination could carry her to Maine and Camp now.

One minute, Kristin was settled into her seat on the plane, checking her phone one last time and clicking on her iPod for her playlist that included Taylor Swift, Rascal Flatts, Brad Paisley and Nickelback, among others. The next, it seemed like, the captain announced they were making their descent into the Bangor airport. From there, according to the most recent text from Camp, Kristin was to collect her bags and look for a 20-something-year-old guy in a brightly-colored plaid camp shirt, Bermuda shorts and Sperry Top-Siders.

“That should be easy enough,” Kristin thought. “It’ll probably be deserted in baggage claim and he’ll pop right out to my eyes.” She was wrong!

Baggage claim was extremely crowded, so much so that Kristin started to get a bit claustrophobic.

“Well, it is early June, so all these people must be tourists.” According to the visitor’s guide of Maine that Kristin had purchased, Bangor was encircled by lakes, rivers, the Appalachian Mountain Club 100 Mile Wilderness Conservation Area, and even a golf course or two. There were five expansive recreational areas within Bangor’s city limits alone. Kristin stood in awe. She was so entranced that she almost missed her zebra-print duffel bag and roller suitcase on the carousel.

Fortunately, a handsome guy, maybe a little older than her, managed to grab both off the carousel and somehow correctly identify that she was their owner. Kristin was beyond impressed.

“Hi, I’m Brennan.” They shook hands, Kristin still in bewilderment over everything that had just happened.

“Hello? Are you in there?” Brennan waved his free hand in front of Kristin’s shocked face.

“How, how did you …” Kristin trailed off. “Whoa. Sorry. I’m Kristin. But I guess you figured that out with my luggage tags. Thanks for grabbing them for me.”

Brennan shrugged, but not in a jerky way that the guys at Kristin’s high school did for the awestruck girls. “Hey, I don’t mind. I noticed your zebra-print ID tag on your backpack there, and just kind of put two and two together. Besides, most of the girls your age are crowded around Rainbow Plaid Guy over there.”

Kristin nodded and let go of his hand as Brennan jerked his thumb toward the large crowd that was gathered two baggage carousels over to their left.

Kristin laughed. The guy she was instructed to look for did indeed have on an extremely bright, almost neon-colored plaid shirt, two baggage carousels over. His white dry-erase board just simply said “CAMP.” An abnormally large number of teens, mostly girls but also a few guys, were crowded around him.

Brennan offered to carry Kristin’s backpack as she got situated with her other bags. “Geez, I think I overpacked. I know the text said to bring enough supplies for almost a month, but now that I’m carrying it, I’m regretting it,” she sighed as she heaved the duffel bag across her body and adjusted the handle of the roller suitcase. Brennan chuckled to himself and smiled at Kristin.

“I like her, and we just met. I’m so stoked that we’re headed to Camp together … Crap, I haven’t even said that and here I am offering to carry her backpack. Oh well …” Brennan mulled.

“Hey, Kristin, did I mention that I’m going to Camp too?”

Kristin felt a surge of warmth throughout her body, though she wasn’t quite sure why. “No, you didn’t. But that’s totally awesome! Otherwise, I don’t think you would have offered to help me with my backpack so quickly. I appreciate that so much, by the way. Thanks!”

Brennan felt his cheeks flush and experienced similar warmth spread over all his body, but particularly below the belt. “Oh God, what is wrong with me? I just met this girl maybe ten minutes ago, and the first major emotion I feel is a hard-on? This is going to be a challenge, no doubt about it …”

He swallowed hard, fought to control his oncoming erection and briefly glanced at Kristin. “She’s gorgeous, has a cute country-like accent and she genuinely thanked me for helping her out. No wonder …”

Still, Brennan was thoroughly embarrassed at his hormones, silently cursing them over and over.

Brennan and Kristin walked toward the large crowd at arm’s length, but couldn’t take their eyes off each other. As they stopped at the fringe of the group to listen to Rainbow Plaid Guy’s overly-excited and nasally-sounding announcements, both of them hoped and prayed they’d at least get to sit together on whatever mode of transportation that would eventually deposit them at Camp…

Well, there you have it! I sincerely hope you enjoyed week 1 of the new series. Come back next Wednesday for more!