“If you get stuck, get away from your desk. Take a walk, take a bath, go to sleep, make a pie, draw, listen to ­music, meditate, exercise; whatever you do, don’t just stick there scowling at the problem. But don’t make telephone calls or go to a party; if you do, other people’s words will pour in where your lost words should be. Open a gap for them, create a space. Be patient.” ~Hilary Mantel 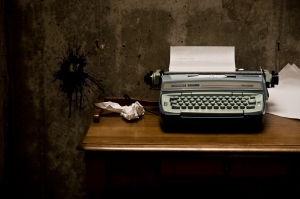 I thought this photo was appropriate for this week – I started hitting the proverbial “wall” in my daily writing. So much so, that I didn’t write anything new on Wednesday, Thursday, or Friday.

I figured I needed a brain break. To prevent myself from crumpling up the paper in the photo, so to speak.

Here’s hoping to play catch-up starting tonight. Then the idea is this new wave of writing, with my brain being refreshed, will carry me through to next week and the end of the month!

… Much like the night that the idea was proposed, no one could speak up immediately. It was almost taboo, forbidden, and immensely awkward. Everyone read worry and fear that was written on each other’s faces. All six of them were basically thinking the same exact thought – What the hell are we doing?

Luckily, the elephant started to get smaller. Bethany had started a binder full of research, and started to pass it around. She’d also thought to bring along the photo albums from her two previous Europe excursions. That broke the tension, albeit slightly.

Everyone thumbed through the books for a few minutes, and they all got back around to Bethany eventually. She stacked them in a neat pile as she sat Indian-style on Bill’s bedroom floor, stroking the corner of the purple photo album aimlessly. Finally, she took a deep breath and said, “Well, what do y’all think?”

Everyone glanced around, unsure of what to do or say. Then, Anabelle spoke up.

Like the first night, Anabelle’s affirmation kicked off instant chatter. It was a great flurry of conversation. All three books left Bethany’s lap again and didn’t return for a good while. It was difficult keeping up and keeping track – Everyone was going in different directions. It had a wave of excitement to it, but it crashed just as quickly as a wave would on the beach.

The conversation died down again, and it became this awkward staring contest. No one wanted to kill the enthusiasm, but the challenges needed to be addressed eventually.

“So, of course y’all know that Bill and I are getting married. We’re thinking about sometime next year. And it wouldn’t be a happy wedding without all four of you being a part of it. So, the question is, how will this affect our European adventure?”

Everyone sighed, with Bill the loudest.

Bethany spoke up next.

“No worries. Actually, your wedding is a good sign, I think. Because of the wedding, it will give all of us more time to plan this grand adventure of ours, and definitely more working time to save as much money as possible.”

Hunter nodded in agreement. So did Will. Only Lisanna looked worried.

Everyone immediately said “Aww” at the nickname, which helped.

Lisanna swallowed. This was the first time she had braved to address the whole group.

“I’m just freaked out because I’m the youngest. I don’t have anything lined up yet for when I leave LT in December. That is, if I actually leave LT …”

Her voice quivered and trailed off. Hunter kissed her temple and rubbed her shoulder.

“Birdy, it’s alright – I promise. No one here expects you to have a job as soon as you leave LT. And, you will be leaving in December – We’re all sure of it. Right, guys?”

Lisanna smiled through her tear-filled eyes. She wiped at them, clearly embarrassed.

“I just want to be able to contribute. I’m so excited about this. I think this whole Europe thing, plus Bill and Anabelle getting married, are signs of hope.”

Lisanna nodded. “I’ve been so depressed recently. Lost, almost. That’s why I didn’t want you come down and stay with me last night. I wanted to sort out my thoughts and feelings before coming here today. It helped, but I’m worried about our relationship. What girl wants to be alone when your boyfriend is practically begging to come see you?”

Bethany and Anabelle had to quickly contain their laughter.

Bill and Will immediately exchanged glances of pure bewilderment. At that, everyone busted out laughing.

Bethany and Anabelle tried to figure out who was going to speak first.

“It’s true though. You can look as bewildered as you want. We love you, Will and Bill, but there are days and nights where we just need some peace and quiet. Everyone needs some time alone. Everyone.”

At that, Will and Bill just shrugged their shoulders; that was the universal signal to move on.

The three girls then, at that moment, felt more united than ever. Before now, Lisanna felt somewhat left out. She was the youngest out of everyone, and not nearly as close to the rest of the group. But because of all these emotions and honesty, it seemed that everyone was going to get along just fine.

Amidst all the discussion, Hunter got an idea. It was something he had mentioned, albeit briefly, to Bethany on the FlixelFlaxen. He had gotten the feeling that Bethany had glossed over it though, so he figured it was worth mentioning to the entire group.

All chatter ceased and each head swiveled in his direction.

Hunter cleared his throat. “I was thinking about living arrangements – What if we stumble upon a castle?”

The only response Hunter got was the ear-to-ear grins on everyone’s faces.

Since Hunter had mentioned castles, she marked him down as being charge of living arrangements – Both temporary and potentially permanent.

Since Bill had worked in a supermarket for many years prior, Bethany knew he was the expert on food and groceries.

For Will, she immediately put down everything design-wise. What Will did with that task was completely up to him; she had the ultimate confidence that he would help design the near-perfect European adventure, as well as be excellent at marketing it to the group.

Lisanna and Anabelle were the only ones left. Bethany purposely wanted to assign tasks to the boys first – They were far less complicated. She wanted to give more thought and care to the girls – Emotions and all.

Bethany started to consider their foreign language experiences at LT. She herself had suffered through Spanish, as did Hunter. Anabelle was the resident expert on all things German, so that made it a little easier. Lisanna was Hispanic, but Bethany didn’t know how fluent she truly was. She also wanted to consult Will and Bill. Everyone had to have taken at least one foreign language throughout high school and college, no matter where they attended. Fortunately, English was a shoo-in.

Anabelle had an extensive travel history, so Bethany decided to put her in charge of the overall itinerary.

The main question was Lisanna. Bethany knew better than to call her out in front of the whole group, so she wanted to take a more subtle route.

Meanwhile, the anxiety was gradually building. There were still a lot of practical questions that hadn’t yet been answered, like money, passports, and jobs – All those details that were, you know, only slightly important. But no one seemed bothered by it. Nothing was set in stone as of yet. There was lots of scheming and dreaming, and that’s the way it should be. At least, for now.

Over the next two weeks, Lisanna and Bethany talked almost as much as Hunter and Bethany did via the FlixelFlaxen. It seemed like that initial conversation in Bill’s living room had sparked something. Bethany certainly wanted to get to know Lisanna better – But it started to get uncomfortable more quickly than Bethany had expected.

It was apparent, almost right off the bat, that Lisanna was texting all the time. It was like her phone never left her hands, although Bethany knew full well that she had a full load of classes, and homework, and her other friends at LT. Plus, there was Hunter, too. Bethany didn’t want Lisanna to get distracted – Especially not now, with the month of November fast approaching.

… It finally came to a head the day before Halloween, less than a week since last they’d met. Bethany’s phone was vibrating at least 30 times per hour – So much so that she had to silence it well before lunchtime. She knew Lisanna’s class schedule by heart, and becoming concerned that Lisanna was just ignoring it all.

… The dial tone hummed as Bethany muttered, “Come on, come on, just pick up the damn phone, Lizzy.”

Finally, at the last ring before voicemail kicked in, Lizzy’s voice crackled.

“Wait! Do not hang up this phone. Listen to me. I’m worried about you – You’re texting me constantly. Are you even paying attention in your classes anymore?”

Bethany raised her free palm to her forehead and let out an exasperated sigh.

“Lizzy – I don’t want to be your mother. But – You have to focus now, more than ever. You do want to pass your classes, don’t you?

The only thing Bethany heard from the other end was soft sobbing.