“The art of storytelling is reaching its end because the epic side of truth, wisdom, is dying out.” ~Walter Benjamin 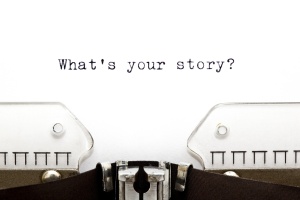 … Finally, Will was the first audience member to speak.

With that, everyone started talking at once, except for Hunter and Bethany. This was not the reaction they had prepared for, it was actually better than they had expected. They both exhaled a small sigh of relief.

Of course, the whole story hadn’t been revealed, either.

The initial conversation went on for at least 15 minutes before it died down. It seemed like every country had been discussed in that time, and with each new country and city that was named, the excitement continued to build.

Without warning, it got deathly quiet. Eight pairs of eyes slowly focused back on Hunter and Bethany.

Fortunately, Hunter did the talking this time.

“Nothing is set in stone. It’s just an idea. But we were thinking that the six of us could, well, relocate.”

Now the gasps clearly contained shock and surprise. Everyone’s eyes were as wide as saucers. No one spoke. It appeared that all jaws had simultaneously hit the floor.

There was no flurry of conversation. Just silence. …

Finally, after what seemed like hours, it was Anabelle who broke the silence.

Everyone’s eyes looked at each other around the circle. No one moved, no one spoke. There was barely any breathing.

Bill took a deep breath and finally said what everyone was thinking.

“This is crazy. Absolutely crazy! But, I like it.”

Their Saturday adventure stretched into Sunday. No one slept that night. It was like a teenage slumber party – Everyone was whispering and basically giggling. The idea was simply crazy and nutty, but it sounded like loads of fun.

Everyone eventually fell asleep, the three couples intertwined in different places in Bill’s bedroom. All six of them had different dreams of Europe dancing in their heads.

The next morning, it was like everyone had left their old lives behind. All they could talk about was the future. Everyone had a different version, but it all led down the same path.

As everyone prepared to leave Bill’s house, the excitement was electrifying. A whole new adventure was in its infancy. …

Bethany almost slipped up, but luckily she caught herself. She turned the story into reminiscing about her previous trips to Europe – The first was 17 days in high school, and the second was a spring break trip courtesy of an art class at LT. In fact, she was the only one of the six to have previously traveled to any country in Europe. So she was automatically considered to be the expert.

Hunter and Bethany had also decided to keep their conversation on the FlixelFlaxen to a minimum. They still messaged daily, but swore to not talk about Europe unless the six of them were together. It didn’t seem fair, or right. They wanted to keep it as even and equal as possible. …

However, the final semester for Lisanna was quickly eroding her spirit, and it was becoming increasingly difficult for her to keep allowing Hunter to visit her on the weekends. She wanted to get the best grades possible, but ultimately make sure she passed all of her classes. They planned to walk at commencement in May, together. They both were part of the five-year plan at LT, but neither were ashamed of that. Lisanna just wanted to pass her classes and graduate – LT itself was quickly becoming part of the problem. She was also terrified of the real world, and what that meant for her relationship with Hunter. She felt torn, and was becoming frantic with each passing day.

Fortunately, being alone in the car for the 45-minute drive to Bill’s was therapeutic. She lost herself in the mix CD that Hunter had given her a month earlier for their anniversary. Her thoughts about the future took her to another place too.

“Maybe Europe is the sign that I’ve been looking for,” she thought as she cruised down the highway.

She did miss Hunter’s company in the car – They always had their best discussions there. But at the same time, she had just come off of midterms and needed Friday to clear her head. She had desperately wanted Hunter to come stay the night with her – For him to just hold her close and tell her everything was going to be alright, that it was going to be just fine – but at the same time, she just wanted to be alone. And that wanting to be alone terrified her even more. What kind of person, in a loving long-term relationship, wanted to be alone?